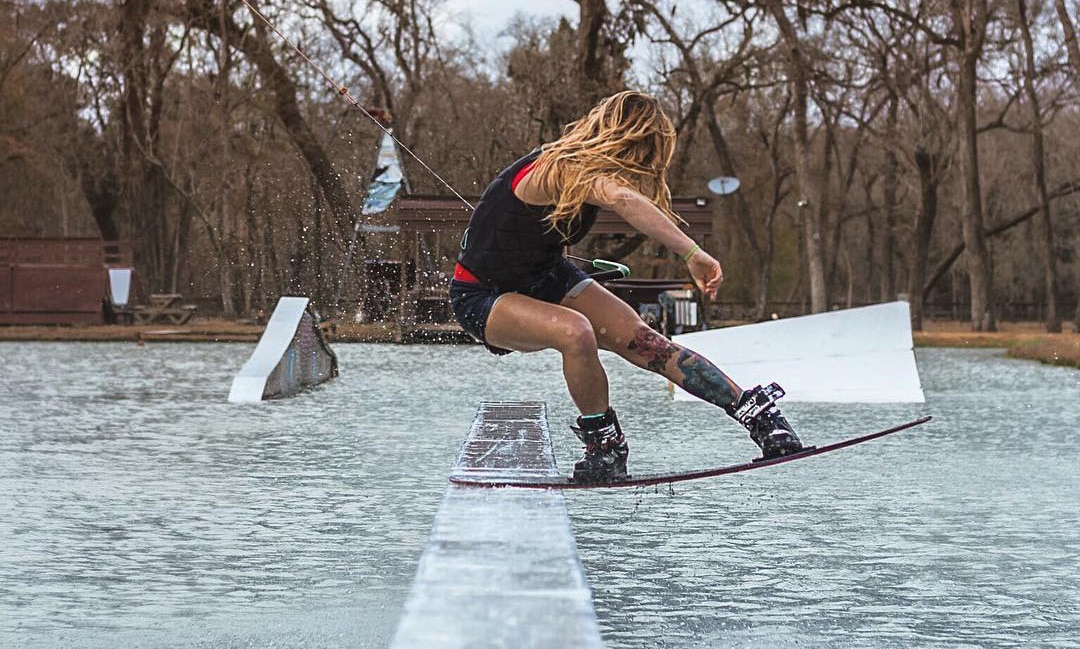 What is going on with female wakeboarding – and what can we do about it.

The media coverage of women’s wakeboarding needs a paradigm shift as is evident from what we have found recently in the media. We are here to do just that but the power lies in your hands, the riders.

There have been two articles posted on social media this weekend that have grabbed our attention and both serve as a affirmation of what we are doing and why WakeSista was born.

In 2012 KiteSista Magazine was born as a response to the growing misrepresentation of females in the industry by brands, media and the riders themselves as they believed a growing pressure to please sponsors in a small but fast growing sport was their greatest chance of success off the water.

KiteSista connected immediately with the riders and the rider run brands and did our best to promote their positive actions, push their media into the spotlight and support them at events. It was this support at events which really turned a page for us, realising riders were getting almost no coverage at competitions and a lot of the audience were walking away when it was the girls time to compete, which unbelievably was also being reflected in the commentary on live feeds at the time.

These girls were risking everything to show what their hard work and training had achieved and because it wasn’t as much of a spectacle as the boys, they were being ignored.

This is not new, it happened in snowboarding at the beginning, a lot of girl skateboarders will testify that it is STILL going on (which contributes to the strength and character of female led skate crews and media) and as was made very clear to us this weekend, it is still going on in Wakeboarding. 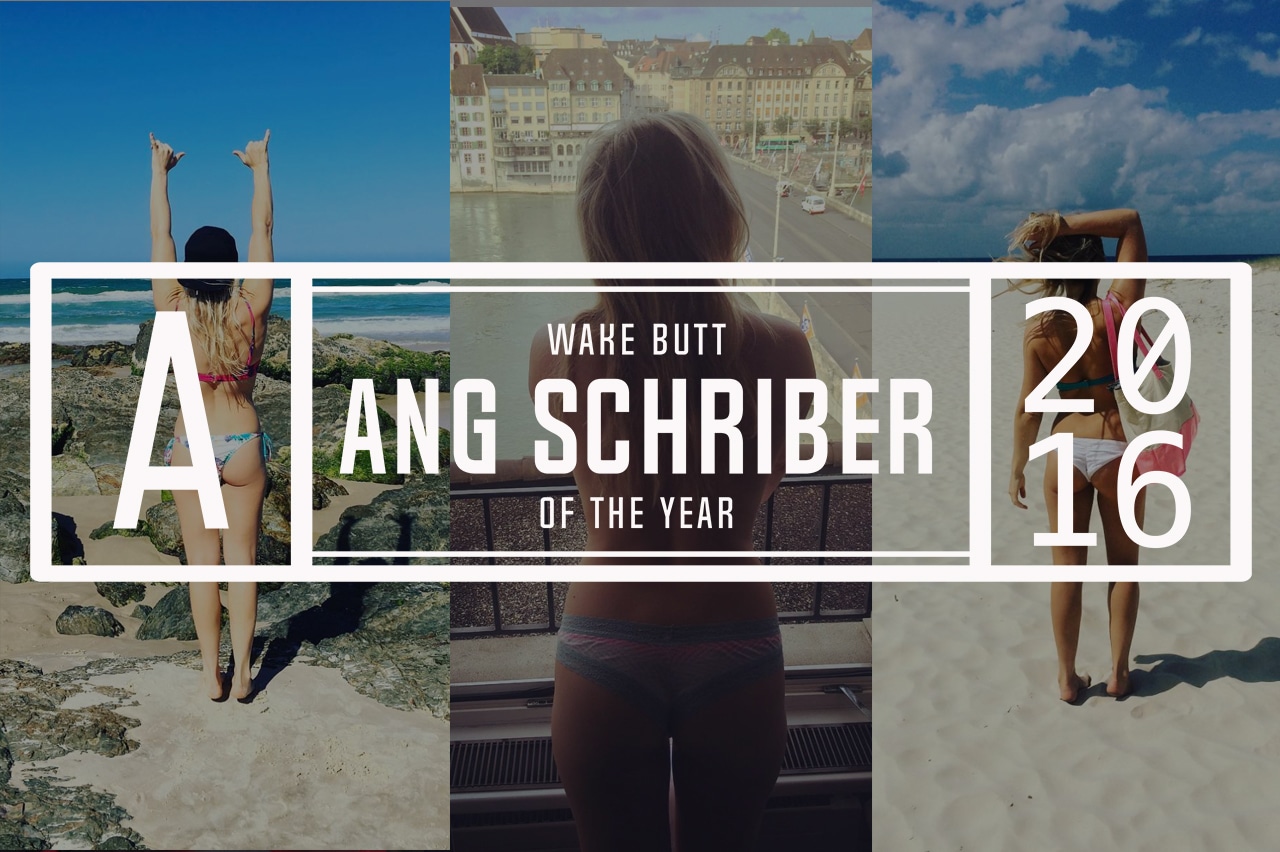 “Wake Butt Of The Year”

Yup, you read that correctly. Although we are likely not about to make any friends at Alliance Wake, we can live with that when they decided that their female rider of the year award would be better scrapped and replaced with “Wake Butt Of The Year” which they awarded to Angelika Schriber.

Seriously! This girl is AWESOME, just check out her most recent edit for evidence of that – yet they chose to give her an award for her ass. This is not a small blog either, it is one of if not the biggest online wakeboarding magazine. 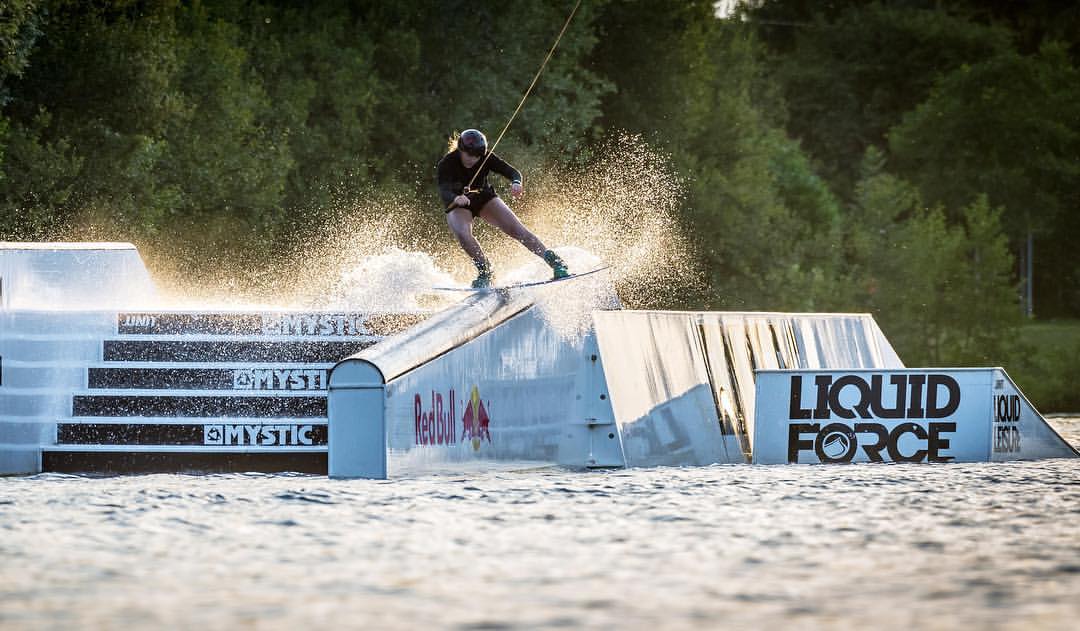 The worst part is that all they had to say in words to support this ‘honoured’ award was “We know, you only bought a boat to get girls in bikinis on your boat. Angelika Schriber wins Wake Butt of the Year in 2016!”

That’s it. Thanks Angelika for your training, hard work, falling down, picking yourself up …nice ass. 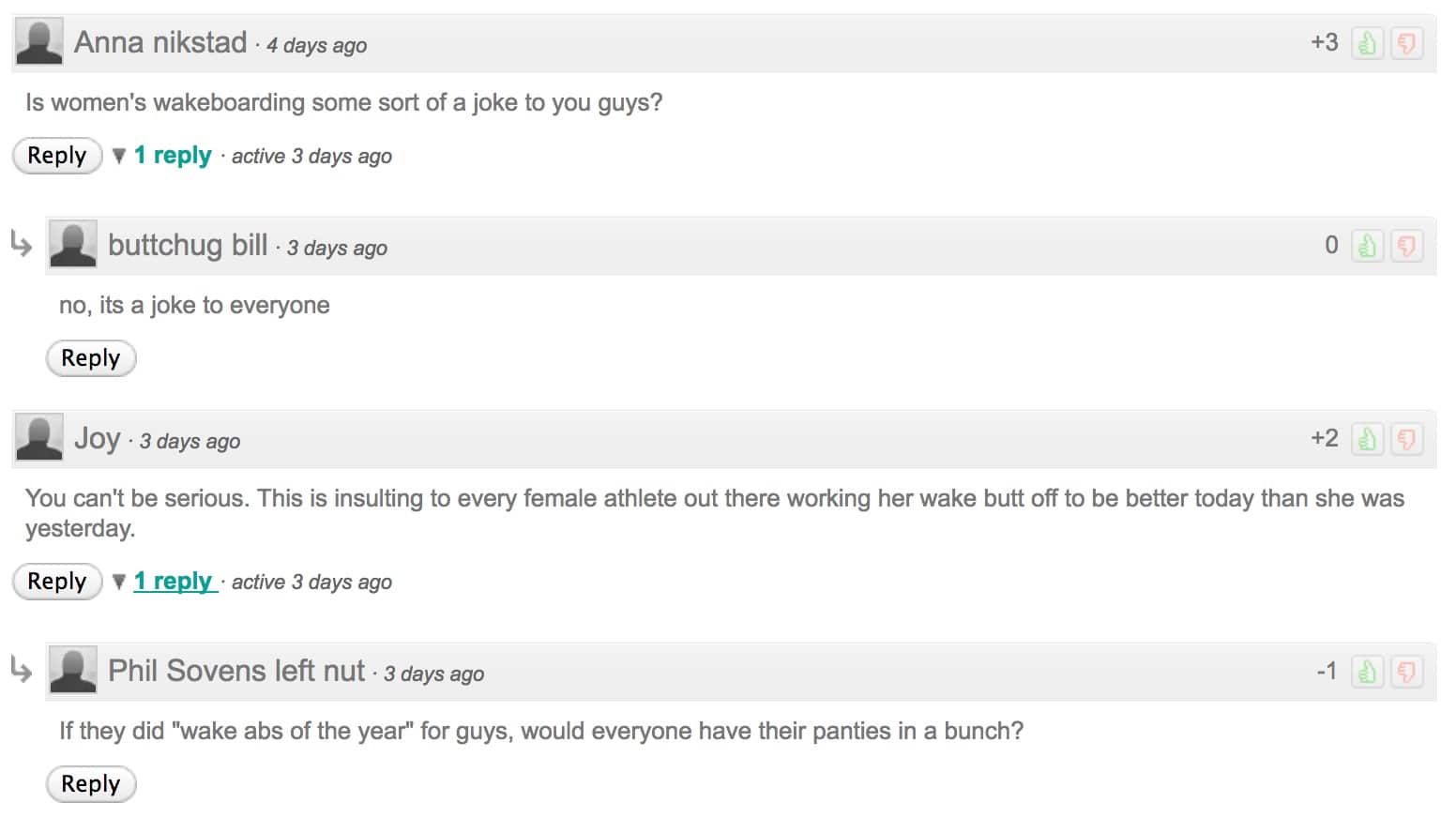 Yes, ..someone replying to Anna Nikstad, one of the top female wakeboarders out there and telling her that female riding is a joke. We guess this person doesn’t have any daughters but no one from the magazine or anywhere stood up to this ignorance.

That said a quick look at their ‘Girls’ section on their site which will come as no surprise is a pinup category, makes us realise that we have not come as far as we might hope in gender equality in action sports representation of females in the media. 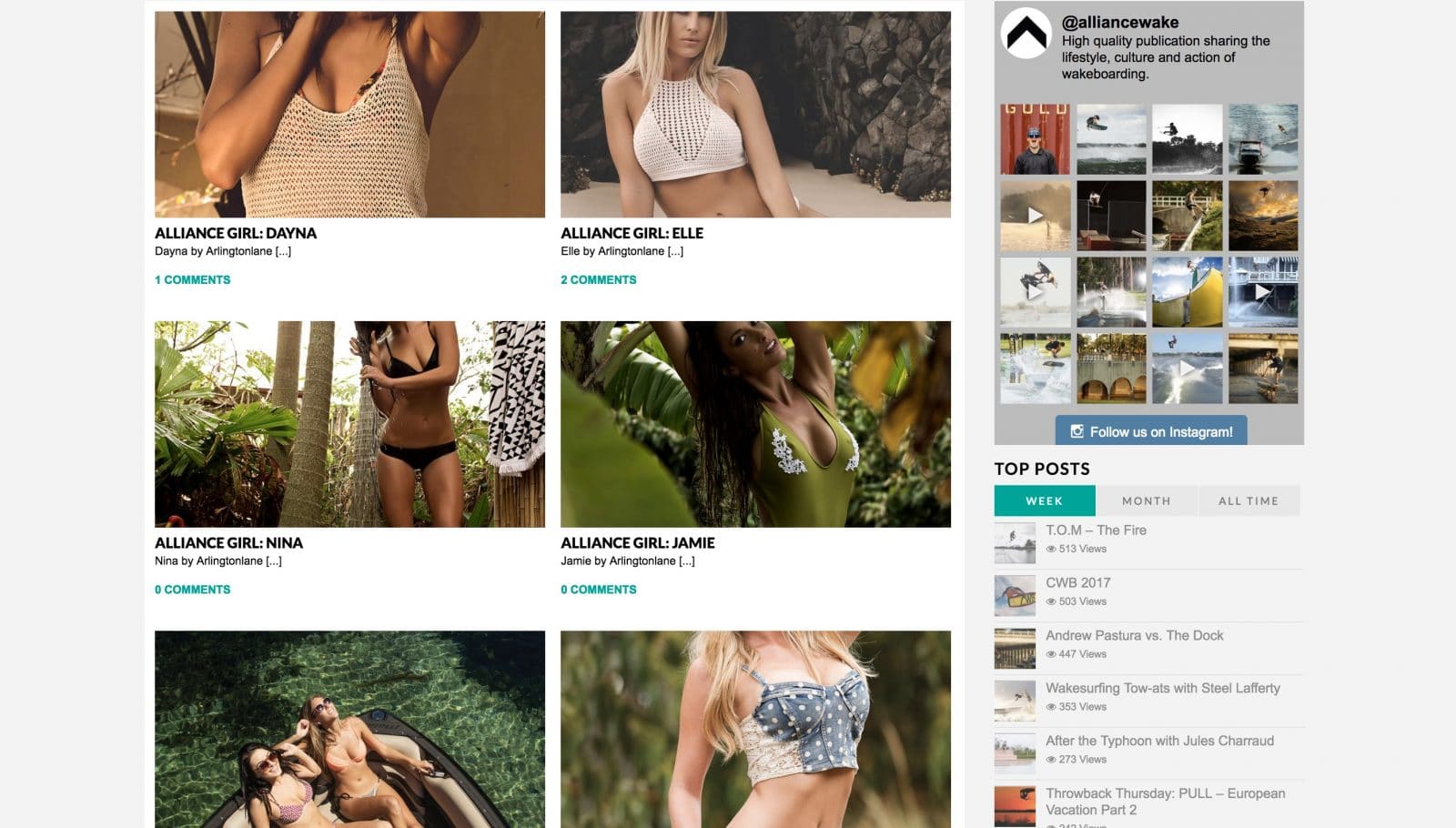 If that was not enough, we then found this in our newsfeed a few hours later…

The Reality of a female wakeboarder

Caroline “Carro” Djupsjö is a 24 year old Swedish wakeboarder with over 10 years of hard graft on the water and she wrote this awesome yet slightly shocking article – THE REALITY OF A FEMALE WAKEBOARDER …we recommend you go and read it, but if you want some of the impact excerpts without leaving this article, how about this:

“I have so many stories that I don’t know where to start. From the time a judge in a world event slapped my butt not only on one but on two occasions while I was nervously standing on the starting dock to the time a company told me ”But Carro, you are already getting paid a lot for a female athlete, why would you think your salary deserves to be equal to the mens?”. 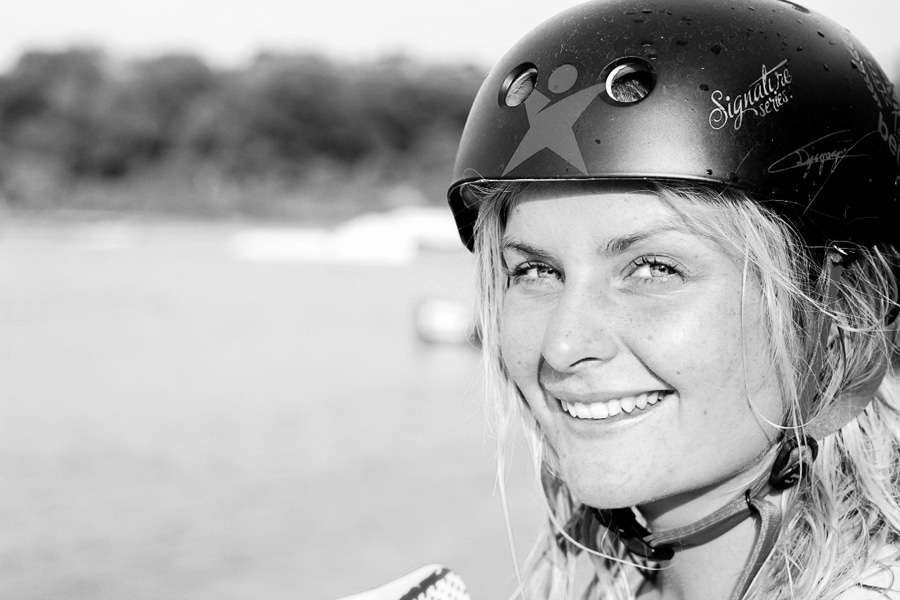 So what can we and you do about this?

This is the best part, the power is not in the hands of the big brands and sponsors, it is you the riders who shape the image of who you are and the sport you represent, and surprisingly women’s wakeboarding as massively under represented in the media. Until now.

We are here to make sure the best of what you do gets out there and to push and promote both your media and capture and publish what female wakeboarding is to you, the riders. 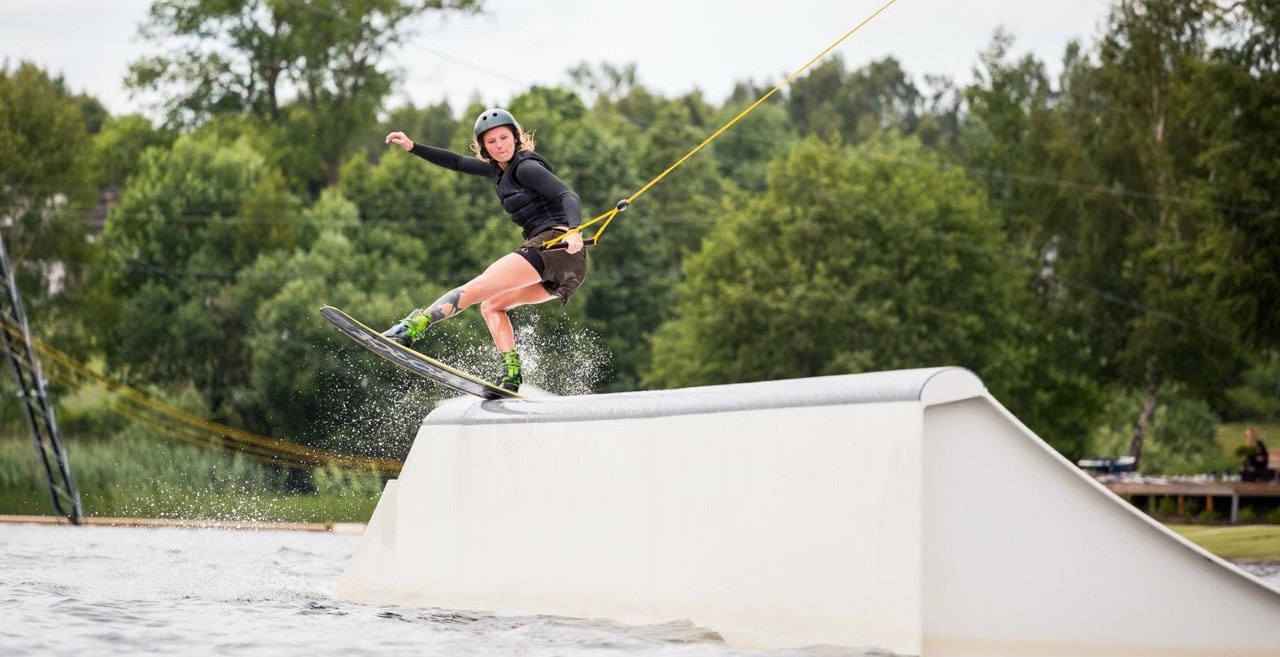 You have a responsibility of course to produce that media. So we ask that you take that responsibility to heart and think twice before posting Instagram images that you think will get you more likes from the male demographic because it shows off your assets, …and when editing your videos, don’t choose the only shot with your bum in it as the thumbnail because you think otherwise it will be overlooked. YOU have the power to form women’s wakeboarding and we are here to make sure that your positive impact reaches a global audience.

So if you want to get involved you can start by tagging your images on Instagram with #WakeSista and by sending us your content and happenings to [email protected]
If you would like to get involved and write for us or use us to reach the female audience then we would be more than pleased to help you do so through quality informative content.
Don’t forget to follow us on Facebook and Instagram and look out for us at events in 2017 (we are definitely coming to ‘Plastic Playground’ in July in London) where we will be doing our best to get you the coverage you deserve. 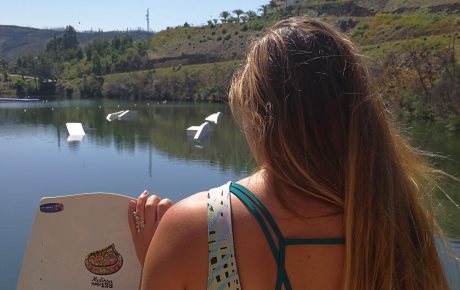 Wakeboarding in Portugal: The Quietness of the Blue Lake

One cold morning in Lisbon heralds a day when endings and beginnings coincide. It is the last day of 2017 – the day I start wakeboarding and discover a new world in Portugal. 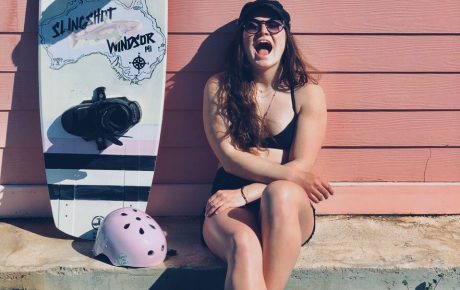 Sina Fuchs’ stylish riding and creativity immediately caught our eye. Progressing like crazy and always having fun, she put together some exclusive clips and made time for WakeSista to answer a few questions. 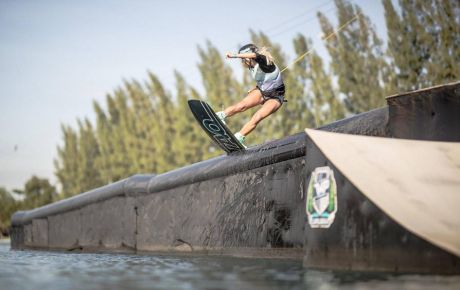 Here is Lisa’s run from the Plastic Playground stop 2 in LONDON. 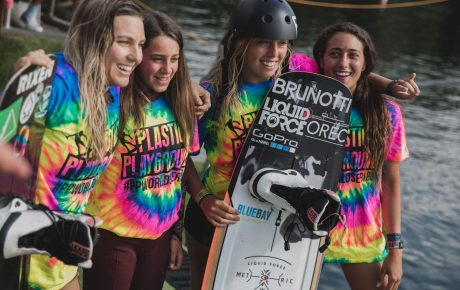 This weekend the London tour stop of Plastic Playground took place in Liquid Leisure. Find out what went down with the ladies with all the results and exclusive images. 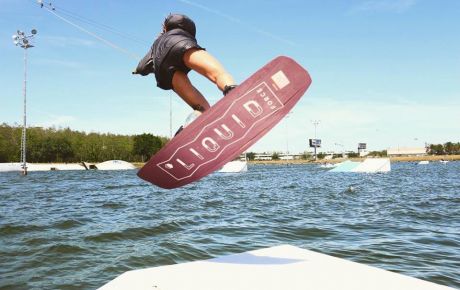 Anna Nikstad joins the Liquid Force Team and here is a first video filmed & edited by William Klangby  as a Liquid Force rider.

Sponsored articles are advertisement placements. But while they are paid for, we only accept companies or products that adhere to the KiteSista guidelines of suitability for our audience. Basically, we only accept advertisers who we've already written about or would write about naturally.

If you'd like to potentially get your product or service included in our Sponsored spot, please contact our advertising team.

Congratulations, you have been entered into the competition, Good Luck.

Why not share this page using the buttons on the left or below to tell your friends about it so they can have a chance too.

Your vote has been registered. Have you voted in all of the awards?